Shelly began quilting in 1973 and has been teaching quilting classes for more than 30 years. She is an author, pattern designer, teacher and lecturer who loves to travel.  After entering her work in numerous national and regional quilt shows, she came to appreciate the judge’s evaluations.  She was encouraged by their positive remarks and appreciated the comments referring to areas that needed improvement.  Shelly began judging locally in 2004 at guild quilt shows and quilt exhibits at county fairs.  She has also juried the International Quilt Association show for the Houston Quilt Festival.  After four years of study she became a National Quilting Association Certified Judge in 2014. www.shellyburge.com

Cindy began sewing in Jr. High Home Economics, making her own clothes and crafts. She officially became a quilter when she was introduced to the rotary cutter and half-square triangle in 1985. She was an interior decorator for eight years in Arizona and Utah. She began making and selling appliquéd wall-hangings, clothing and crafts as a home business and found her interests expanding to include teaching quilting and making commission pieces. Today, she makes samples for major companies like P&B, Springs, RJR, and Quiltmaker magazine.

Cindy is very involved in several local quilt guilds and has held the office of president for the Omaha Quilters Guild.  She has served as Chairman of the Steering/Long Range Planning Committee for several years. A member of the Nebraska State Quilt Guild, Omaha Quilters’ Guild, Cottonwood Quilt Guild, The Appliqué Society, NQA and AQS, she is very active in the local and national quilt family. She was the local co-chairman for the 1999 National Quilting Association Show in Omaha, Nebraska.

Cindy became a National Quilting Association Certified Quilt Judge in 1998.  She has judged for local and national shows around the country.

She is currently teaching quilting and specialty clothing classes at Bernina Sewing Center in Omaha. She specializes in teaching rotary and sewing machine skills in all aspects of quilt making to all skill levels and teaches several wearable art classes.  Professional Quilter Magazine nominated her for National Teacher of the Year in 2009.

She has co-authored books and a line of block-of-the-month patterns with Jo Morton. One of the patterns was featured on the cover of “Keepsake Quilting Catalog,” spring 2001. She has been published in Quiltmaker, Fons and Porters magazines and Leisure Arts publications.  Cindy’s quilts have been shown in AQS, Houston, PIQS and NQA.

Today Cindy balances being a busy quilter with enjoying her two grandsons and going fishing as often as possible!  www.cindyerickson.com 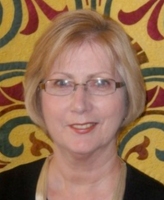 Judy is a Past President of  the National Quilting Association, Inc. (NQA), the Arizona Quilters Guild (AQG) and Arizona Longarm Quilters Association (AZLAQ).  She also served as Co-Director of the NQA 2012-2013 Annual Quilt Shows and the 2008 and 2011 Annual AQG Quilt Shows.  In 2010, she was recognized for her leadership and commitment to AQG, as the recipient of its annual Member of the Year Award.

Since 2006, Judy has judged approximately 8,400 quilts. and aided at shows reflecting in excess of 5,000 quilts.  Judy became a National Quilting Association (NQA) Certified Judge in 2011. She fulfilled the standards established by the NQA for the Master Quilt Award Program and became qualified to evaluate Masterpiece quilts in 2014.  She is also a charter member of the National Association of Certified Quilt Judges (NAQCJ). She currently judges on a local, regional and national level and prides herself on always providing constructive, supportive, and meaningful judging comments.

Being an NAQCJ and NQA Certified Judge allows Judy to pursue her passion and joy for all things quilting.  She not only finds it  inspiring, but also exciting to learn new techniques, patterns and quilting designs from quilters and their quilts across the country. Judy loves to encourage quilters to continue their mastery of quilting and to display their quilts in other venues, so they can share their accomplishments with their fellow quilters and the general public. www.jtaylornqacj.com